This document looks at Shell Verifier published in July 2015 instead of conventional busser mechanism that intermediated Cookbook test.
(Shell Verifier has been merged to Test Kitchen in December 2015.) 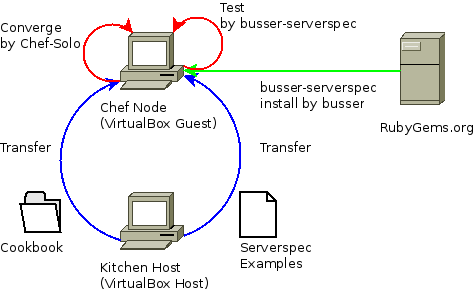 This example assumes using Vagrant (VirtualBox) for Kitchen Driver, and chef-solo for Kitchen Provisioner. It will be the same if other Driver and Provisioner are used. Also, testcase is assumed made by Serverspec.

At first when Test Kitchen is executed, Chef Node is created to apply Cookbook with Vagrant (VirtualBox). Transfer Cookbook to the Node, then apply and converge the Node with Chef-Solo.

By this, Chef Cookbook test is realized by Serverspec.

Following points are the issues of testing with busser mechanism;

This could be no choice because busser was designed to test by creating isolated environment within Chef Node, and to test the Cookbook with the test suite where no network functions.

On the other hand, Since Serverspec has SSH and various network functions, busser is not required as a go-between if Serverspec is executed at host side. Shell Verifier realizes this.

What is Shell Verifier?

We have to know the behavior of the Cookbook test with Test Kitchen + Shell Verifier + Serverspec.

Verifier is the mechanism that the part of Verify step is made pluggable and was introduced in Test Kitchen 1.4.0.
The busser is actually called by the Verifier. 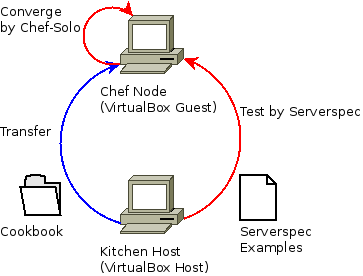 This example as well is assumed using Vagrant (VirtualBox) for Kitchen Driver, and chef-solo for Kitchen Provisioner. It will be the same if other Driver and Provisioner are used. Also, testcase is assumed made by Serverspec.

In this case as well, when Test Kitchen is executed, Chef Node is created to apply Cookbook with Vagrant (VirtualBox). Transfer Cookbook to the Node, then apply and converge the Node with Chef-Solo.

When the convergence is finished, Test Kitchen will execute the designated command as Shell Verifier in .kitchen.yml. Assuming Serverspec (rspec) is executed here, Serverspec will execute SSH connection to Chef Node, in other words, executing testcase for the remote host.

With this method, converged Chef Node is placed under clean environment (destroy it after the Cookbook test, though), Serverspec which is supposed to be already installed at local machine is not necessarily installed every time on Cookbook test.

It is easy for you to imagine how Shell Verifier is simple if conducting Cookbook test with Serverspec, comparing busser + serverspec.

In this section we will conduct an actual test using Shell Verifier. The Cookbook is here. Let's take a look at the actual part of Shell Verifier before starting the test;

Use Shell Verifier at Verify step, specify what kind of command to be executed by this.

This is a testcase as just what you would expect. There is no difference from using busser. In other words, it can be diverted.

Here, Setting is made for Serverspec to SSH log in to Chef Node.

In order to SSH log in to Chef Node, Shell Verifier obtains and sets the environment variables of KITCHEN_HOSTNAME, KITCHEN_USERNAME, KITCHEN_PORT, KITCHEN_SSH_KEY.

Then, the actual log by executing Test Kitchen is as follows;

Package "apache2"
should be installed

Package "git-core"
should be installed

Package "curl"
should be installed

Package "unzip"
should be installed

Service "apache2"
should be enabled
should be running

File "/var/www/index.html"
should be file
should contain "Welcome to my top page"

File "/var/www/img"
should be directory

It was very simple to complete Cookbook test by Serverspec.

We looked at Cookbook testing by Serverspec with Shell Viewer after reviewing testing with busser and busser-serverspec.
You can now understand the former is overwhelmingly simpler and easier. Also, It is beneficial to call the test suites such as Infrataster and Capybara from Shell Verifier.

Frankly speaking, as Cookbook testing can be made without using complex busser, I don't use busser-serverspec recently even I'm the author.
Also, the reason why I positively moved toward merging in the discussion of Add shell verifier Pull Request and the Q&A session of Chef Meetup ( featuring Docker ) was that the merit was very big by not using busser-serverspec.

I would like to thank Yukihiko SAWANOBORI who is author of Shell Verifier and all those who contributed merging.